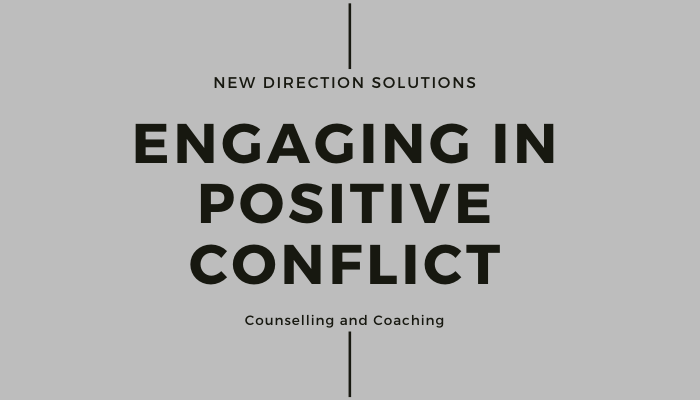 When pressures on relationships increase, frustrations frequently come across in how you talk to each other. It can then be difficult for one person to hear the other due to the hurt being experienced.

Typically you may want to tell the other person how they are making you feel, what they are doing wrong and why they need to change. Over time this can escalate into blame, criticism, distracting or withdrawal.

After a time you know how to hurt each other and anticipate being disappointed. No longer are you able to talk about matters that are important to you both. Nor do you feel listened to, valued or understood.

For you and the other person this impasse needs to change to help the situation improve. When we are emotionally charged this overwhelms reason and judgement. It is human nature to instantly react emotionally for survival reasons of fight, flight or fight.

This overrides the logic and consideration of a measured response. When we feel threatened or under attack we revert to reaction rather than response.

Staying in the here and now without reacting and going to a place of blame or criticism requires self-awareness and prior intention.

You can’t change the other person, but you can make changes yourself. This might feel as though you are out of control of the situation. In reality it is both empowering and liberating as you gain autonomy over yourself.

It is necessary to move away from talking about ‘You’; directed at your partner, as in blaming or criticizing. Otherwise they will feel they are being attacked and they themselves stay in fight, flight or freeze mode.

Equally important is not always talking in ‘We’ terms. This distances you from what is happening and is another way of indirectly attributing blame and criticism.

Avoid talking for the other person or finishing their sentences for them. This is a subtle way of saying I will talk for you, I know better than you do, or you cannot / will not tell it how it really is; how I see things.

What is important is to talk in terms of I. This enables you to own that thought, feeling or action. It’s yours and can’t be taken away. The other person can’t say; no, you don’t feel like that.

In this way you can own and express the situation from your perspective. You take responsibility for yourself and your part you are playing in what is happening.

Often a great many small things occur that impacts on the relationship that aren’t addressed and resolved amicably. Instead the small specific issues slowly gravitate together and become one big general disaffected mass.

This is like a massive relational knot that gets bigger and tighter, squeezing out the good things in the relationship. As it gets bigger there is no longer any room for meeting any of each other’s desires or wants.

It is necessary to slowly untangle this massive relational knot. To do this requires the tension to be reduced and start to follow one piece of the tread at a time.

To be able to discuss the differences and hurts, openly and honestly takes courage and risk. Without doing so the couple continue to repeat psychological patterns in an attempt to get needs met that ultimately leads to pain and dissatisfaction

Being able to state your position without accusing brings benefits. It brings a greater sense of self and identity, defines yourself to the other person, clarifies personal boundaries and discloses unmet desires.

The conflicts are the differences that are being experienced, that however are not being recognised, accepted or understood. By exploring these differences without blame, shame or criticism they can be addressed and ultimately resolved.

Positive conflict means difficulties being faced where neither person is diminished.

The Narrator and Enquirer

One person will be the Narrator who shares their thoughts and feelings, the other will be the Enquirer who actively listens and asks questions to develop their understanding.

Both of you start by agreeing to explore a topic without reacting and allowing yourself to emotionally escalate. This is to avoid going into an inner Critical Parent position and attacking the other or moving into the inner Victim Child position and feeling victimised.

Instead consciously stay in the ‘here and now’ responsive Adult position that is predominately accepting and curious in nature. The Narrator has to avoid the temptation of ‘bating’ and getting a ‘rise’ from the Enquirer. The Enquirer also seeks to avoid allowing themselves to being ‘hooked’ by the speaker.

If things are highly charged it may be better to have an agreed time limit such as 15 minutes. This is so there is an agreed duration rather that an open ended engagement that may otherwise deplete energies and patience. If the situation is more calm this can be extended further such as 30 minutes.

Whoever chooses to be the Narrator has the opportunity tell their story so giving voice to their wishes and desires. It is important to know what we want and to be able to share this with our partner. 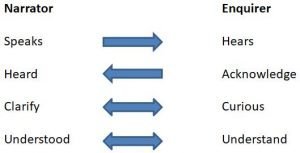 The Narrator must find their voice and speak out, this can take courage. Meanwhile the Enquirer puts aside their own impulse to react defensively or critically and instead actually listens to and hears what the Narrator is saying.

In this way the partner who was the Narrator feels understood and the Enquirer understands the Narrators position although they do not necessary agree with it. It is the ability to understand the others perspective that is important.

When one person has been the Narrator then the other person get to take on that role. This may be immediately after of at a later time or date.

As the sharing of personal wishes and differences are highlighted this often leads to better understanding and accommodation of each other.

This is an exercise which can benefit couples enormously and if one way to approach conflict where before it is ignored until it boils over resulting in simmering resentment.

Where this doesn’t help conflict then it is necessary to go back a stage and for each individual to look at themselves and their part in the conflict. To understand psychological patterns is important to understand how and why they start.

Therefore if one relationship ends the destructive elements don’t just play out again in the next relationship repeating themselves.

Check out other counselling and coaching articles and wellbeing blogs  on my website.

Attending To Our Breath
Scroll to top