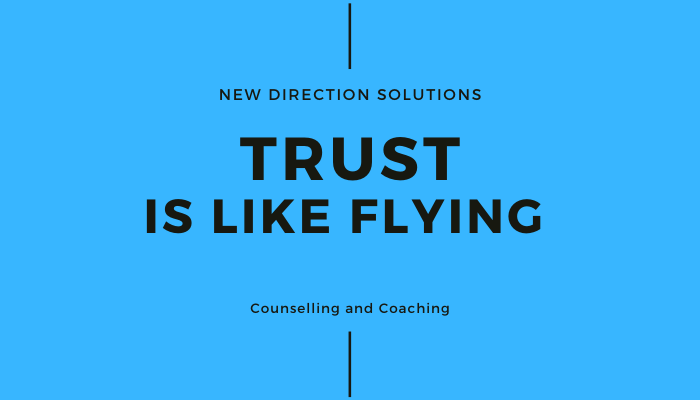 I was on a flight returning from the Isle of Man and I was aware during the landing of different people reactions. Some appeared at ease and relaxed through out others had held the arms of the chairs tightly, or clasped their hands together tightly with white knuckles.

This is an event that typifies being out of control and putting trust in others; the pilot and in this instance physics and the dynamics of lift. We can consciously recognise that there is a pilot at the controls and a travelling by plane statistically safer than driving, and yet still retain that concern for safety that we don’t necessarily feel with other modes of transport.

Often its the thought of being inside an metal container high above the ground and all that ’empty’ space below.

The fear of flying typifies fears in general, of being out of control and of being helpless. The difference between those with and without the fear is primarily one of trust. In one the anxiety is around the likelihood of falling out of the sky, crashing and dying. The other is the belief in science and the abilities of the pilot and the certainty all will be well.

The chances of coming to any harm are the same for both. One views the likely outcome as catastrophic and the other as an every day event.

Strange then how immediately prior to the landing it goes a little quite and the moment the plane touches down there can be heard all around the gentle release of breath from even the apparent relaxed and seasoned travellers.

Life is very much like flying. We often cannot control those events around us, however we can feel in control through trust in ourselves and others. Whilst accepting that at times things will happen at times over which we have no control but can have the ability to cope and get through it until we are able to draw breathe again.

Want to join the discussion?
Feel free to contribute!

This site uses Akismet to reduce spam. Learn how your comment data is processed.

Check out other counselling and coaching articles and wellbeing blogs  on my website.

Be Strong – Not Showing Feelings
Scroll to top